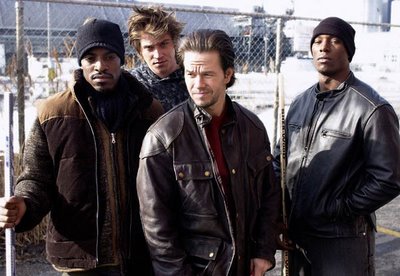 I spent a lot of time this weekend watching TV with my Dad. My Dad is in his seventies and has a TV routine that he isn't about to quit at this point. That routine for the most part revolves around cop shows, the history and discovery channels, and sports. All of those things are just fine with me but I like to mix in a movie or something funny when I'm sitting in front of the TV for hours. I managed to convince my Dad to watch Four Brothers which was On Demand. Four Brothers stars Mark Walberg, Andre 3000 (from Outcast), Tyrese Gibson and Garrett Hedlund as four brothers (get it) who return to Michigan when their adoptive mother is murdered. It's a decent movie if a little obvious and vulgar. I was embarassed by the language each time my Mother passed by our living room. It wasn't just your fucks and bitches either it was much much worse. My Dad had been wanting to see this movie but won't go to a movie theater. He likes to smoke during a movie. Movie theatres don't allow you to smoke in the theatre anymore. This movie is worth watching as long as you aren't watching it with your mother or small children. I'm not the sort that thinks a kid can't handle a little cussing or a tit here and there but the extremely graphic language is a little much in this movie.

While I'm on the topic of watching TV with my Dad I want to share something I saw this weekend that I'd never seen before but first a little background. My Dad was a truck driver pretty much my whole life until he lost his job when his union went on strike. I've seen him handle various difficult situations without ever flinching. My family once left on one of those all day shopping trips we used to make (to various malls, the supermarket; the weekly errands) only to return minutes later because we'd forgotten something or another I can't remember what. I was sent in to retrieve this thing only to find the door busted in and several guys robbing our house. I ran out to the car and told my father what was going on. He ran into the house to take them all on without even changing the expression on his face.

So anyway, we were watching the Preakness. My Dad and I always try to catch the triple crown races. My Dad was bothered by falling asleep and missing the Kentucky Derby. He was determined to see the Preakness. You've probably heard about the Preakness favorite and Derby winner Barbaro busting out of the gate early. I'm certain you heard that just seconds into the race Barbaro hurt his leg in several places and he may have to be destroyed if surgery can't fix his leg properly. When Barbaro limped away on three legs my father cried. I've never ever 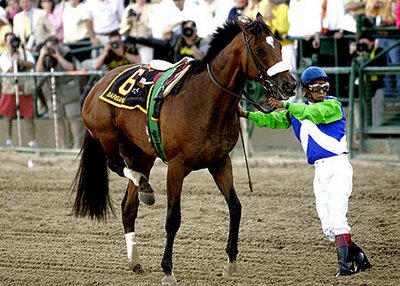 seen my father cry. But here he was crying over a horse. I admit it was a sad moment but I wasn't tearing up and I cried when Randy Quaid sacrificed himself during Independence Day. My father explained (I didn't ask, I never would we don't do that in my family) that while growing up on a farm he'd helped a horse give birth and was given the horse by his father. He'd named the horse Daisy Mae (he couldn't remember or didn't care to explain why he chose that name) and had become quite attatched to it. Then one day his father told him that the farm had too many horses and had to sell a few including Daisy Mae. My father begged his father to choose another horse but he refused and wouldn't tell him why. Seeing Barbaro go down the way he did reminded him of that sad story. So he was actually crying about a horse he'd lost more than sixty years ago.