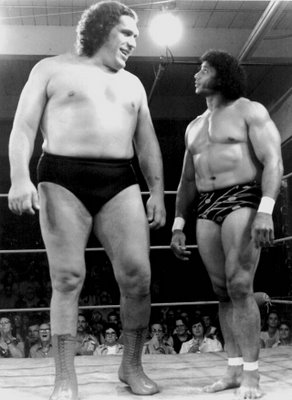 I used to watch a lot of wrestling. Mostly the WWF (before the the World Wildlife Fund suddenly decided that after years of coexisting they needed those initials and forced the WWF to change into the WWE) but any wrestling on tv would do. Back in those olden days before cable (actually cable probably existed but we didn't have it at my house) Me, my brother and our father would tune in Boston's channel 56 to catch the WWF's collection of matches from the previous week. Those matches were almost always a huge wrestling star against some scrub that had absolutely no chance of winning. 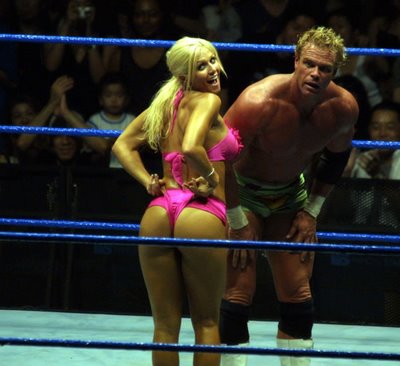 If you wanted to see stars fight stars in those days you had to buy a ticket to one of the monthly events in an arena near you. Our big wrestling events were usually held at the old Boston Garden. My father used to take me and my brother to those matches when we could afford it. We saw tons of classic matches like the Magnificent Muraco and World Champion Bob Backlund in a two hour scientific wrestling match. This isn't a scientific match as you might expect from newer wrestlers like Kurt Angle. No, this was two guys laying in the middle of the ring and applying and enduring leg and arm locks.

My favorite live match pitted Andre the Giant against Killer Khan. Killer Khan was over seven feet tall but dwarfed by the massive Giant. They were having a feud over something or another and were fighting each other a lot. In this particular match Khan snuck up behind Andre the Giant and hit him with a chair or something (I don't actually remember what he used). Andre the Giant was knocked unconscious and fell in his stomach. Unfortunately for Killer Khan to pin a wrestler he must be on his back. Killer Khan spent most of the match trying to flip the 600lb Giant to his back but couldn't do it. With the fans laughing Killer Khan climbed to the top rope to give the fans the business. Andre the Giant comes to with Khan on the top rope screaming at the fans. Andre sneaks up on him as only a 600lb giant can and body slammed him from the top rope which allowed Andre to pin him easily. They don't do matches like that anymore.

Watch wrestling these days (as I did last night, could you tell?) and you'll see a lot of flash but very little in the way of showmanship in the ring. Today's wrestlers rely on flash and gimics that entertain briefly but in my not so humble opinion get old very quickly. How many times can Vince McMahon betray someone? Monday Night Raw is still a pretty popular show I guess. The show is definitely watchable my problem is it isn't very memorable. Maybe I'll check out Smackdown and see if that show is any better.