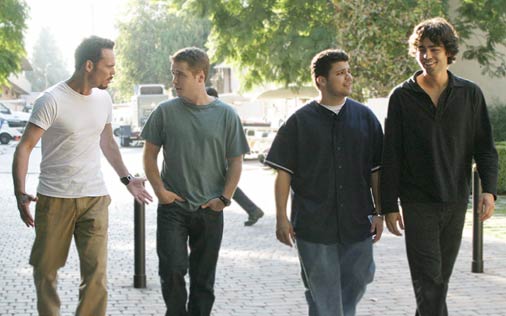 The London Free Press has a brief but informative review if the first three episodes of Entourage. It does give away the basic plot of the first three stories so if you want to be surprised don't read any further...

Carrie, Samantha, Charlotte and Miranda worry about finding Mr. Right, getting too old to have kids, balancing a career with relationships and whether $800 is too much to spend on a pair of Manolo Blahnik shoes.

Vince, Eric, Drama and Turtle worry about getting paid and having sex. And that's pretty much it.

The gaping chasm that separates the genders is never more evident than when Sex and the City is stacked next to the show that some call its male equivalent, HBO's Entourage.

Kicking off its hotly anticipated third season tomorrow, Entourage finds itself back on familiar and solid footing. Unlike HBO's The Sopranos, which spent its opening episodes this season noodling around in a bizarre airport hotel purgatory, Entourage is ditching the downers from last season -- no more watching Vince mope and moon over Mandy Moore -- and giving itself a welcome emotional reboot.

For those coming late to the party, the half-hour comedy follows four friends from Queens, N.Y., who are navigating the unfamiliar and shark-infested waters of Hollywood. Vincent Chase (Adrian Grenier) is an up-and-coming A-list star who's brought his three closest compatriots to Tinseltown to keep him company, and engage in a little unabashed coattail-riding.

The other planets in Vince's orbit are his agent, Ari Gold (scene-stealer Jeremy Piven), and his publicist, Shauna (Debi Mazar).

Loosely based on the experiences of executive producer Mark Wahlberg, Entourage has struck a perfect balance between insider pokes at the Hollywood machine and the give-and-take that goes in close male friendships, where talking about feelings just isn't done, dawg.

Season three's first episode picks up not long after season two's finale, with Vince's potential blockbuster Aquaman opening in theatres (directed by none other than James Cameron, who again plays himself in cameos).

Like sultans selecting their concubines, the fellas size up the inexhaustible flow of hot women in Los Angeles to pick premiere-night dates, but Vince ultimately decides his mom (guest star Mercedes Ruehl) would be the perfect girl to walk the red carpet with him. Getting her from New York to L.A. isn't going to be easy, though.

In the season's second episode, the fellas are trying to quietly catch an opening day screening of Aquaman, but blackouts threaten their plans as well as the movie's bottom line. Eventually they fall in with a pair of comic book dorks and make every high-school outcast's dream come true.

Entourage packs a lot into each half-hour package. The writing is sharp, the Hollywood observations are sharper and the acting is uniformly great (though Piven, as always, takes it to a whole new level.)

But what gives the show such a devoted fan following is the vicarious life it offers. Who wouldn't love to have the world on a string the way Vince does? Who wouldn't love to walk into a Ducati dealership, pull out a credit card and buy barely street-legal motorcycles for his buddies, just because his movie had a good opening weekend?

Or, failing that, who wouldn't love to at least roll with a crew like this? If Vince is the head of the group, Eric is its heart and frequently its conscience. He's our average-guy entry into this strange and hedonistic new world.

Yep, wish-fulfilment at its best. But it can't all be sunshine and starlets, and by the new season's third episode, the clouds start to roll in. The primary one being Dom, boyhood pal from back east who's been released from jail and has tracked down Vince and the gang in L.A.

Dom's presence upsets what it turns out was a very delicate balance of friendship and responsibility within Entourage's gang, striking at the core of what makes the group tick.

Because of this, it'll be interesting to see how the rest of the season plays out. Even Carrie and the girls could tell you that four is company, but five's a crowd.