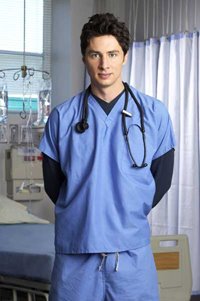 Zach Braff has a new website called ZachBraff.com. My first impression is that the site will be worth checking up on for both movie fans and Zach Braff fans. It features a regular written blog as well as a fancy pants video blog. You can also check out what Braff calls an exclusive clip of The Last Kiss. The Last Kiss is a remake of the 2001 Italian film, L 'Ultimo Bacio, which starred Stefano Accorsi and Giovanna Mezzogiorno, and was directed by Gabriele Muccino. The Italian film followed a young man whose life was sent spinning when his girlfriend announced she was pregnant. Check out an interesting 2004 interview with Muccino talking about his movie Ricordati di Me.


The version of the last kiss Braff stars in has been re-written by Paul Haggis with Braff providing some dialogue tweaks. This version was also due to star Rachel McAdams (who I love) but she dropped out due to what is called commitment conflicts on IMDB.com. McAdams was replaced by Jacinda Barrett. Barrett was a star on a season of the Real World in 1992.