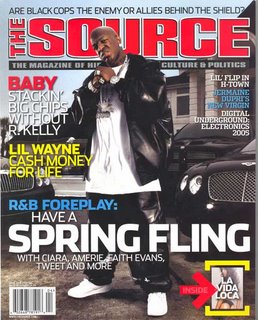 I used to love the Source. It was the mag to read if you followed Hip-Hop. Then Rap got large and they forgot what it was all about.

THE tortured tale of The Source, the embattled hip-hop magazine, wound its way into bankruptcy court yesterday.

Three disgruntled creditors filed an involuntary Chapter 7 bankruptcy petition against the Source Enterprises Inc. which could force a liquidation sale.

The filing derailed a plan by Textron financial, the Providence, R.I.-based investor that had loaned the Source's former executive team of David Mays and Raymond "Benzino" Scott some $18 million, to finally extract itself from the troubled hip-hop operation.

Textron hoped it could conduct a much-delayed auction of the stock it owned when the court ordered Mays and Benzino to relinquish ownership after running up millions in unpaid bills and reneging on the company's loan obligations. Black Enterprise/Greenwich Street Partners, another lender of money to the old regime, had been attempting to run the magazine for the past several months.

and booting Mays and Scott.

The first publication in the post-Mays and Benzino era declared: "Now 100% Benzino Free!"

Now, however, L. Londell McMillan, a high-profile lawyer who was apparently hired by Mays and Benzino when th 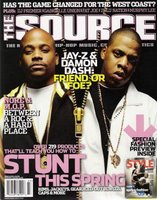 were still locked in a fight for control of The Source, claimed in the filing he was never paid by the pair.

What's more, the lawyer who has represented Prince, Michael Jackson and Lil' Kim said the new ownership team should now foot the bill.

He claims the Source Enterprises owes him $530,228 for "unpaid legal services" according to the filing in Manhattan court.

Two other creditors also joined the petition, David Villorente, an individual from Brooklyn who says he is owed $4,700, and an Encino, Calif.-based firm, PC Mall Inc., which claims it is owed about $28,000 for computer supplies.

Earl "Butch" Graves, Jr., the CEO of Black Enterprises and a key architect of the new ownership team that is trying to restore The Source to its former glory, was fuming over the bankruptcy petition.

"Everyone who is a creditor will now have to come to the court and negotiate," said Graves.

He called McMillan "a disgruntled, unsecured creditor who was trying to have us negotiate with him outside of all the other creditors."

When that failed, he said McMillan filed the suit along with two other smaller creditors.

"He's more interested in making headlines than in representing his client," Graves said.

Neither McMillan, nor the bankruptcy lawyer representing the three unsecured creditors, could be reached for comment.

The legal limbo has not been helpful to the magazine. Retailers report late deliveries on several issues since the takeover.