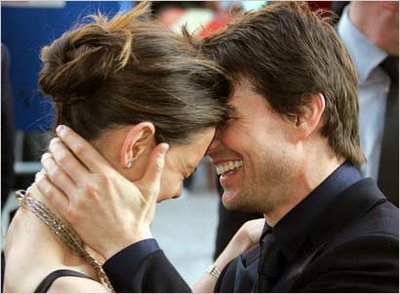 I like for the people I deal with to be themselves. I'm not interested in people that brown-nose or try to curry favor. Maybe that's why Paramount's treatment of their long time star Tom Cruise bothers me so much. I know Cruise is a little...different. Jumping on Oprah's couch or very publically having a difference of opinion with the mental health industry just doesn't seem very extreme to me. Maybe I just know too many people who are far more odd. I've met people that believe in all sorts of different things. I've met people who've claimed to be G-d on earth. Veganism is a little wierd to some people, should all the vegans or vegetarians in Hollywood lose their status?

The other thing that bothers me is the idea that Cruise's eccentricities are the reason Mission Impossible III only did 100 million instead of 200 million or whatever the goal was. How about making an original movie, something less derivative than the third sequel of a movie based on a TV Show based on a novel. I mean just because Tom Cruise doesn't believe in anti-depressants will you or yours stop taking them? I doubt it, so why make a big deal of his beliefs?

Check Out This Story:

Redstone, 83, blames the harsh commentary for keeping droves of young women away from Cruise's films.

"The Brooke Shields thing really turned women against him," a source close to the studio told The News. "It was the last straw."

The former Top Gun also shocked many fans with his frequent Scientology stumping and his famous "Oprah" couch-jumping, as he proclaimed his love for actress partner Katie Holmes.

Cruise may have also offended Redstone's old-world values, some said.