If You're Gonna Make Reality TV... 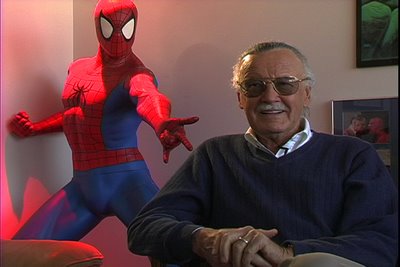 If you're going to make so-called reality television there is no better model than Stan Lee's Who Wants to be a Superhero? A reality show should show real life at its most absurd. Lets face it having an asshole roommate or a boss that gets on your nerves isn't exactly a mind blowing development. But we all probably have that friend that is just a little off. Hell, you might be that friend for someone, I'm sure I am. The wierd ones are so much more entertaining and fun to be around than the prissy good looking ones or the rich snotty ones.

The Sci-Fi Channel's new reality TV series "Who Wants to Be a Superhero?" is only midway through its run (Thursdays at 9 p.m. EST), but co-producer Stan Lee - famous founder of Marvel Comics - has already told four would-be supermen and two superwomen, "Turn in your costume!" "Levity" (secret identity: L.A. toymaker Tobias Trost) was the first to go, after admitting he intended to get rich selling action figures of himself, followed closely by the adrenaline-powered "Nitro G" (secret identity: Staten Island comic-shop employee Darren Passarello).

Confused by the concept of a "reality" show about superheroes? You're not alone. "Science fiction and reality really shouldn't coexist; it's an oxymoron," admits Mark Stern, Sci-Fi's executive VP of original programming. "But the challenge is how to extend the idea of superheroes into competition between people who can't stop bullets or race locomotives."