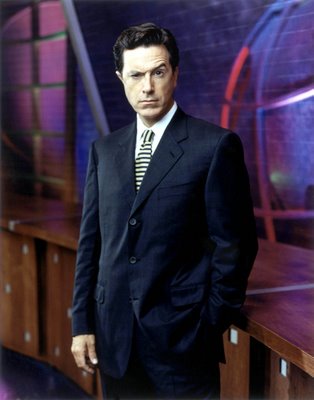 I need to be up early in the morning but I doubt I'll get much sleep tonight. I just found this article and after updating my various sites (bronxpride.com, Fantasybaseballupdate.com, and this one) I have a feeling I'll be headed to youtube.com as I have on many sleepless nights. This time the late night session is inspired by Stephen Colbert. Colbert has challenged Star Wars Geeks all over the world to create video of him fighting with a lightsaber, of course hundreds have risen to the task. Does anyone think he didn't know they would?

Monday, he invited viewers to edit a video of him jumping around in front of a green screen to make it seem as if he was involved in a Jedi lightsaber duel.

By yesterday afternoon, there were hundreds of Web videos spreading like wildfire across the Internet of Colbert fake-fighting with a toy lightsaber. On the video Web site YouTube, several of the mini-movies had been viewed a total of more than 10,000 times