The Return of Cracked 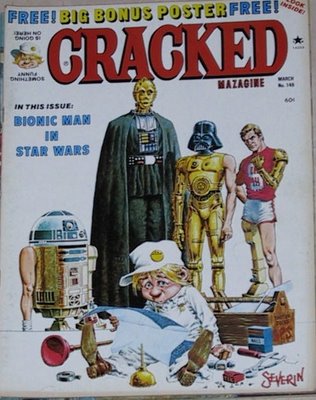 When I was young enough to have to accompany my parents to the supermarket on the weekend I used to escape whenever I could to the magazine rack. That is where I discovered Mad Magazine and later Cracked. I was probably to young for these mags but they looked like comics from the outside and my parents didn't have any problem with kids reading comics. My Dad is always telling me about the comics he used to read as a kid (he refuses to even touch any of the comics I try to get him to read these days though). I used to have a stack of Mad and Cracked three feet high. I wonder what happened to them...

I'm not convinced on this new version yet but I'm keeping an open mind.

The story of how the crass comics magazine Cracked was brought back to life begins, of all places, at a white-shoe law firm in New York.

A pudgy young lawyer named Monty Sarhan had been giving life to the dreams of Internet entrepreneurs by helping them with finance deals when he caught the entrepreneurial bug himself. He decided to leave the legal profession and "go for the brass ring" by acquiring a media company.

He found that brass ring in the form of Cracked, the juvenile comics rag known for its bathroom humor that had always played second fiddle to Mad Magazine as the top time waster in the nation's study halls. Even he wasn't convinced it was a good idea at first when a friend suggested he consider buying Cracked.

That potential will be revealed when the new Cracked hits newsstands on Tuesday after a two-year hiatus. It had a press run of 100,000 and has a cover price of $3.99. True to its heritage as a lampooner of pop culture, its debut cover features a doctored photo of Tom Cruise's head pasted onto the body of Steve Carell and asks if he is "The 44-Year-Old Virgin?"

But the glossy new version bears little resemblance to the Cracked of old, which relied on hand-drawn cartoons and comic strips. Rather, it resembles the modern breed of "lad mags" like Maxim, Stuff and FHM. It even spoofs the similarity with a gratuitous full-page photo of a scantily clad woman and the caption: "Here is a picture of a skinny blonde model with big breasts."

"It's not so much that I modeled the style after Maxim, it's that I modeled the style for today's tastes," says Sarhan, pointing toward the magazine's short-form writing and busy graphical layout. It's targeted at the 18- to 34-year-old male demographic, a bit older than its original audience but about right to attract the now full-grown juvenile delinquents who enjoyed the magazine in its glory days.