Weeds and Death Cab for Cutie 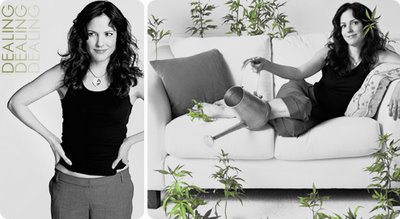 The new season of Weeds premieres tonight and I'm very much looking forward to it. The first season was funny and quite original which is tough to find in these days of copycat sitcoms and reality shows. Do you wanna know what the most intriguing original idea is? Its an idea I would be happy to see stolen by any Tv Show. This seasonof Weeds will feature the theme music performed by a different artist every episode. Pretty cool idea, eh? Elvis Costello, Death Cab for Cutie and Engelbert Humperdinck. If you aren't up to date you might enjoy this very brief summary and review from the daily news. David Bianculli who wrote the article is a little pessimistic but don't let that stop you from tuning in tonight on Showtime at 10pm (est).

From the New York Daily News:

At the end of last season (just released on DVD by Lions Gate, if you need to catch up), recent widow and suburban drug dealer Nancy, played by Mary-Louise Parker, had just slept with a handsome neighbor.

The cliff-hanger climax, so to speak, was her post-coital discovery that the neighbor in question, Peter (guest star Martin Donovan), was a DEA agent.

Her reaction, and his, account for the best story line in the first five new episodes of "Weeds."

Nancy is intent on expanding her neighborhood pot-growing enterprise into a much more sizable and profitable operation, which makes Peter the very definition of persona non grata. Yet he's so taken by her, he doesn't take rejection easily.

His reaction is understandable, because Parker, in this role as so many others, positively sparkles. (I still get made fun of around here for calling her "luminous" last season. But I was right.) Parker turns in a performance bubbling over with vitality and believability, even when the script itself strains credulity or when individual lines of dialogue slip too much into sitcom punch lines and rhythms.