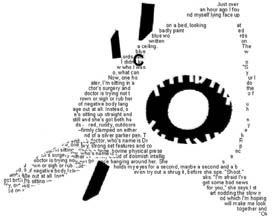 I did not head to the book store to buy this book. To be completely honest I rarely go to the book store knowing exactly what I'll but unless the new Harry Potter or some other long running series has a new volume released. But on this particular occasion I was thinking about web marketing and journalism books. On my way to those sections I found The Raw Shark Texts. It was a combination of the striking but simple blue cover image and the strange title that drew me in.

When I flipped the book open I found (as you will in almost every paperback edition) pages of positive blurbs from dozens of reviewers. Normally this type of things does little to compel me to read further but these blurbs were a little different. They suggested Moby Dick, Alice in Wonderland and the Matrix as possible influences. Intrigued I flipped through it and found strange typographic images and oddly written passages. I kept trying to put it back on the shelf but I couldn't seem to let it go, so I bought it. I'm glad I did.

The Raw Shark Texts was written by Steven Hall. This was his first published full length novel and if nothing else he has created a full time fan in me. The book tells the story of Eric Sanderson who while on a quest to find his lost love loses everything that makes Eric Sanderson himself. He wakes without any memories or hints to who he is. It is only through the arrival of mysterious letters and packages that the new Eric Sanderson begins to find hints of his former life. He begins a quest to find out who he was and a way to escape the creature that haunts him.

If you are a fan of comics and you enjoyed books like Grant Morrison's Animal Man and the Invisibles or Neil Gaiman's Sandman I am willing to bet you'll love this book. I'm disappointed that I missed the original marketing campaign that took place around this book.