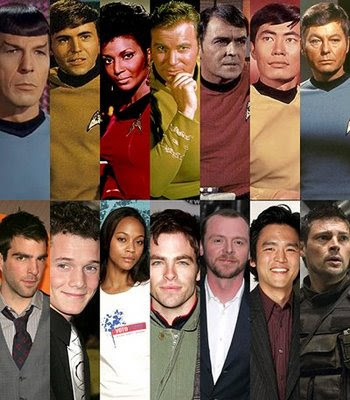 Every Star Trek fan should be offended that J.J. Abrams refuses to respect the franchise of which fate has put him in charge of developing the next incarnation. I can live with re-booting and re-casting but ignoring the cannon of the series is unforgivable in my opinion.

Check out this review of an event put together to convince Star Trek fans that the new version is worth watching from UGO Movie Blog:

J.J. Abrams brought his road show of selected Star Trek scenes from Europe to an undisclosed location in New York City. It was a tough invite to get - I knew a number of people “in the biz” who were unable to land a ticket. In the lobby of the theater there were (I kid you not) two dudes trying to keep the words Star Trek on the dl. Go up to the fourth floor. There was a check-in and everyone had a manila envelope with their name on it. They were for our cell phones. We were then given the once over for “other recording devices.” To make up for this - not only free popcorn and soda, but a free bag of candy. I took two giant sacks of Reese’s Pieces. Behind a curtain was a waiting area with about five or so plasma TVs showing production stills and sketches. There’s what looks like a Klingon Bird of Prey. And a lot of cool explosions. And some sort of chamber at Starfleet Headquarters (I can tell this, because of the Golden Gate Bridge in the background.) Also: shuttlecrafts. The shuttlecrafts look a lot more different than the ones we are used to as compared to the new Enterprise vs. the old. Also - a crazy looking ship. Is this Spock’s “Time Ship?” Who knows?!?!