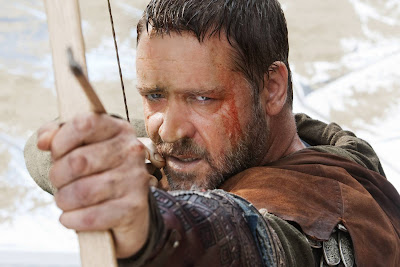 The new Robin Hood movie is good. It misses great because of a few things that can probably be blamed on the script and whoever had final cut. However, if you have a few hours to kill Robin Hood is an entertaining if long diversion.

This is not a traditional telling of the famous Sherwood Forrest. It tells the story of how Robin Hood became an outlaw. It has pretty good (again not great) action sequences. The battles are fun but a little confusing to watch. It is hard to tell who is killing who and the quick cuts become irritating after a while. This is made even more confusing by the lack of proper introductions to the key characters. For half the movie it was "the guy from ER" and "the big dude".

There is more than an hour of film devoted to demonstrating that the Kings both new and old are not very nice. They kill and rob the very people they expect to defend them from the always impending invasion of the french. While none if it is particularly bad halfway through the movie I was mentally shouting for them to get on with it already!

This review reads as if I hated it but the truth is I actually liked it. If I had it to do over I would have seen a matinee and taken a nap first.
Everything That Entertains movies Robin Hood Russell Crowe