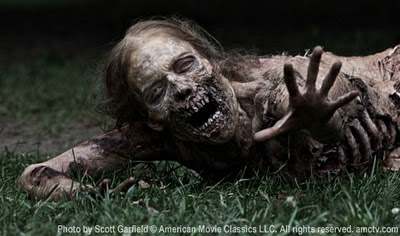 Q: Are you finding things are being physically realized as you had imagined them?

A: Everyone is really trying to do good by the comic, and there are scenes that are straight out of it. I think that fans are just going to be thrilled. But at the same time, [Frank Darabont] is vastly improving the material. And there are things here and there that along the way I should have caught, but didn't. There's some amazing stuff he added for Morgan's character in the Pilot episode that's just not in the comic. It was back story, but he handles it in a way that just really brings it to the forefront. It's like, Morgan, that guy is an awesome character!

Q: You commented last week about how psyched you were to see Andrew Lincoln portraying Rick --

A: I don't see how anyone couldn't see Rick. I don't see how Andrew Lincoln's wife, like 2 years ago, wasn't like, "Oh Hey Rick, how ya doing?" This guy just eats, drinks and sleeps Rick Grimes. Steven Yeun, the actor playing Glenn, was on set for the first time yesterday. He walked over and said hello to Andrew Lincoln. They were chatting, and I looked over and I was like, "That's Rick talking to Glenn!"