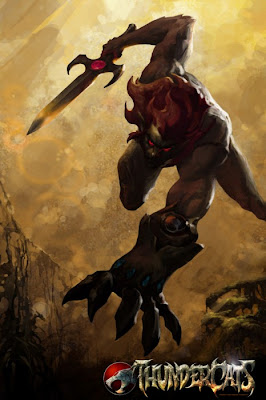 Mania.com is announcing the return of the Thundercats cartoon via the Cartoon Network. The new cartoon appears to be a darker version of the cartoon that was on the air in the 80's.

“In addition to being Warner Bros. Animation’s first anime series, ‘ThunderCats’ marks our most ambitious foray yet into fantasy,” said Register. “The realism and dynamic visual style we’ve achieved are sure to thrill viewers, and the cool weapons, vehicles and technology should help the show appeal to a diverse audience.” The 21st century reimagining of the series marks a creative collaboration between WBA and Studio4°C, one of the most vibrant animation studios in Japan, with credits including “The Animatrix,” “Gotham Knights” and “Halo Legends.” WBA is working closely with Studio4°C, utilizing the latter’s expertise to give the “ThunderCats” characters a new cutting-edge look while remaining true to the compelling storylines and mythology of the original series. “We at Studio4°C are excited to be in this creative partnership with Warner Bros. Animation to bring ‘ThunderCats’ to life,” said Eiko Tanaka, President and CEO, Studio4°C. “This collaboration combines the strengths of our two companies – high production values and great storytelling – toward reintroducing this classic fan-favorite to a new audience.” Roaring to life through WBA and Studio4°C’s use of the Japanese animated artistry of anime, “ThunderCats” characters Lion-O, Mumm-Ra, Panthro, Cheetara and others will spring off the screen with realistic cat-like characteristics inconceivable in previous incarnations.

Check out Mania.com for the rest of the story.
Cartoon Network Everything That Entertains Thundercats