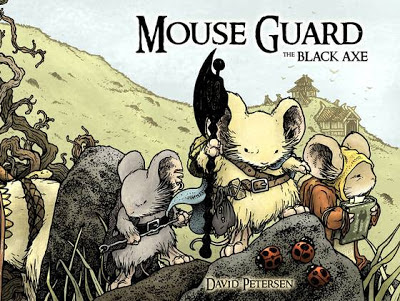 Funny, I was thinking recently about the possibilities that could be created by two of more successful indie publishers merging . It definitely creates a larger presence in the Diamond Distributors catalog, maybe they can even get Premiere Publisher status.

BOOM! Studios, the Eisner and Harvey Award-winning comic book and graphic novel publisher and two-time winner of Diamond Comics Distributors’ prestigious “Best Publisher” Gem Award, has merged with Eisner and Harvey Award-winning Archaia Entertainment, the publisher of graphic novels including Mouse Guard, A Tale of Sand, Rust, Spera, Cowboy, and Gunnerkrigg Court. BOOM! Studios will be the surviving company and the Archaia brand shall be maintained as a distinct imprint of BOOM!.

The addition of Archaia positions BOOM!’s catalog of intellectual property as the largest independent company-controlled comic book and graphic novel library, behind only industry titans DC Entertainment (Warner Bros.) and Marvel Entertainment (Disney). BOOM!’s comic books and graphic novels pioneer a new business model, sharing intellectual property ownership between the company and the creators who generate the content. BOOM!’s Chief Executive Officer and founder, Ross Richie, noted, “Our creator-friendly model ensures that creatives are rewarded financially as they generate the franchises of tomorrow. Archaia operates with the same philosophy and objectives, which is one of the many reasons this combination is such a great fit.”

“We are thrilled and excited to join with BOOM!,” Archaia President and Chief Operating Officer Jack Cummins, who will continue in the same role, said. “BOOM! is very committed to maintaining the brand we’ve worked so hard to build and preserving our relationship with our creators, fans, and retailers. They’re fans of Archaia first and foremost, and are avidly working behind the scenes to expand our market penetration and carry our catalog deeper into retail channels. Archaia readers can expect the same editorial approach that has garnered industry-wide awards but we will have a much stronger platform to deliver our content in all forms and channels. I am personally looking forward to bringing our team together with the fantastic team Ross has built.”

Richie added, “Archaia has a terrific track record for creating award-winning, beautiful books with high production values. Jack Cummins, Stephen Christy, Mark Smylie, and the entire Archaia team have built an amazing publisher. With BOOM!’s resources, Archaia fans will see more of the books they love, while retailers will enjoy better business through stronger trade terms.” The companies also plan to put key items from the Archaia catalog back into print.

BOOM! Executive Chairman Scott Lenet of the venture capital firm DFJ Frontier noted, “We are excited to be investors in a profitable, growing company with a fantastic early track record of creating, curating, and marketing properties that audiences genuinely love. We have ambitious plans to continue to fund the company’s expansion in comics, graphic novels, and other media.”

August 2nd sees the release of the first BOOM! Studios feature film, the Universal Pictures-distributed 2 Guns starring Denzel Washington and Mark Wahlberg, based on the Steven Grant comic book published by BOOM!. The company is currently preparing its second feature film for production: Jeremiah Harm, based on the comic book by Keith Giffen, Alan Grant, and John Mueller, will be directed by Timo Vuourensola of Iron Sky (jeremiahharm.com).

July sees the blockbuster release of Archaia’s Mouse Guard: The Black Axe, created by Eisner Award winner David Petersen, Cyborg 009 in partnership with acclaimed Japanese publisher Ishimori, and The Thrilling Adventure Hour based on the long-running stage play of the same name.

Founded as a niche publisher in 2002, Archaia Entertainment, LLC has become the world renowned Eisner and Harvey Award-winning graphic novel publisher of Mouse Guard, Cowboy, Gunnerkrigg Court, Rust, Spera, Mr. Murder is Dead, Lucid, Artesia, and An Elegy for Amelia Johnson. At the core, Archaia is known for its great content. From its unparalleled reputation for publishing innovative, imaginative, and indelible stories, to its numerous industry awards and nominations, Archaia has proven time-and-time again that it has built one of the industry’s most visually stunning and eclectic slates of graphic novels. This sentiment has also been shared by countless industry news sources, including Ain’t it Cool News, Graphic Policy, and Comic Related, which all honored Archaia as “Best Publisher” of 2010. Additionally, Archaia has built unmatched co-development relationships with some of the most recognizable brands in
Hollywood, including The Jim Henson Company where Archaia has built an entire graphic novel product line, including the multiple award-winning Jim Henson’s Tale of Sand and such beloved tales as The Dark Crystal, The Storyteller, and Fraggle Rock. (archaia.com).
Archaia Entertainment Boom! Studios Everything That Entertains Mouse Guard Multiversity Comics