The Suicide Squad from DC Comics 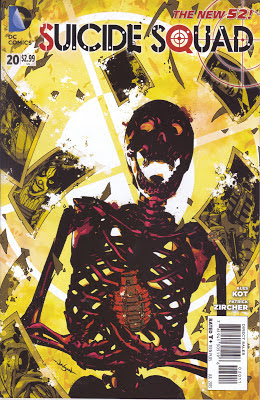 I have not had many positive things to say about DC Comics' Nu52 relaunch. Maybe I am just a bit old fashioned when it comes to comics. I like the long histories and the twisted continuity. I enjoyed the fact that there was a squad of former Robins that still had Batman's back. I loved the nearly omnipotent version of Superman and Krypto and Supergirl. I miss Wally West and Jay Garrett. I liked everyone's origin just the way it was. I was okay with fat Amanda Waller but I never had much use for the Suicide Squad. 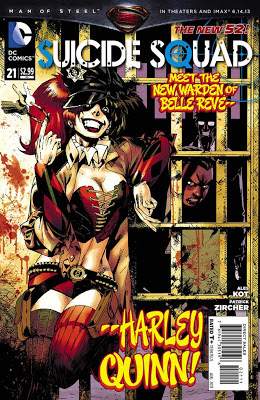 The Suicide Squad is a secret government program that sends a squad of imprisoned Super-Villains on covert missions. The bad guys have bombs implanted into their heads to keep them in line and on mission when not caged. The Suicide Squad of course is under the command of Amanda Waller who until the Green Lantern movie was a very big gal but is now modeled after actress Angela Bassett. It is a very little thing but it annoys me. Anyway the book has always had its ups and downs and since the start of the Nu52 has been mostly down.

I owe some thanks to some recent articles praising the work of  Ales Kot on various projects for smaller publishers. And also to the writers of MultiversityComics.com for praising the new direction Kot has taken since taking over the writing chores of the Suicide Quad with issue #20. Thanks to those articles I picked up the last two issues. I have to say they are worth every penny and well worth your time.

I will not give away the story but these two issues revolve around a potential change in membership and leadership of the squad. It becomes quite clear (if it was not already) that these are not the good guys we are dealing with and it is not even close. I do not know how long Kot can maintain this level of quality but he is certainly off to a damn good start.